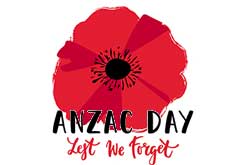 ANZAC Day is on April 25 and is a national day of remembrance and commemoration. This day remembers all Australians who have served and died in war. The date marks the Australian and New Zealand Army Corps 1915 landing at Gallipolli, Turkey, in World War I.

Due to Covid-19, 2020 saw all public ANZAC Day commemorations services cancelled. This was a difficult decision made by the RSL in conjunction with NSW government. This year, 2021, will see commemorations once again take place, but in accordance with Covid guidelines.

Services on the day take two forms. Commemorative services are held across Australia at dawn, which was the time of the original landing. This service usually consists of the traditional order of service, including a veteran’s march, followed by a Commemorative Address, laying of the wreaths, hymns and the sounding of the Last Post. Those present then observe one minute’s silence and the national anthems of both New Zealand and Australia are played.

Later in the day, former servicemen and servicewomen take part in marches through the main streets of towns and cities. School children often join the march as a sign of respect.

The march may then be followed by reunions and lunches hosted by local venues. This is also the day when the traditional Australian game of ‘Two Up’ can be legally played.