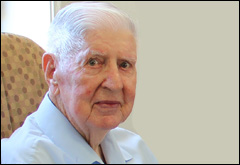 Thursday 23rd January marked the 12 month anniversary of Fr Leo Donnelly’s passing. It is hard to believe this time has passed and that our parish has been with our beloved Fr D for such a long time.

Leo Donnelly was born in Gulargambone in 1927. He was the fourth son of Joseph and Stella and one of nine children. When he was young, Leo suffered a serious bout of rheumatic fever and was sent to recover with his mother’s sister in Port Macquarie. He remained there and completed his secondary education at the convent school. By the time Leo had finished school, he had decided that the priesthood was the vocation for him. He went to study in Springwood, then Manly and eventually went to Rome.

At the age of 24, Leo was ordained as a priest for the Diocese of Lismore. He was appointed as the assistant priest to Fr Curran in Port Macquarie in 1951 before he moved to Lismore in 1954 where he was very active in the work of the diocese. During his time in Lismore, Fr Donnelly was instrumental in establishing the Diocesan Investment Fund (DIF), which now funds million dollar projects throughout the Diocese of Lismore.

In 1970, Fr Donnelly took up a position as the Parish Priest of Port Macquarie. At that time, Port Macquarie had a small population of around 8000. Fr Donnelly was quick to implement the Vatican II changes and utilise them in his vision for the future growth of Port Macquarie. Over time, through the leadership and guidance of Fr Donnelly, the Parish was able to develop an extensive commercial asset portfolio which then funded the expanding range of Parish initiated community-based service.

The services developed by Fr Donnelly included aged care – which today look after over 600 clients in various ways. Fr Donnelly was also strongly committed to Catholic Education. Between 1970 and 2009, Fr Donnelly oversaw the growth of Catholic Education in Port Macquarie expand from one primary school to six campuses, including primary and secondary schools, as well as a vocational college, which is considered the best of its kind in Australia. Fr Donnelly also responded to the need for early childhood services and established a range of centres to cater to this need.

Fr Donnelly’s achievements are too many to detail here, but suffice to say there are so many more that I haven’t mentioned. He has held numerous office and received many awards in recognition of all that he has given and achieved.

In 2018, at the age of 91, Fr Donnelly retired from active duty as the Parish Priest of St Agnes Church in Port Macquarie. While he was retired, he enjoyed life at The Francis Retreat in Bonny Hills. Parish members and employees were still lucky enough to see Fr D regularly and catch up with him.

On Friday 1st February in 2019, almost 2000 people gathered to attend Fr D’s funeral and to celebrate his life. Another 10000 people viewed the service, which streamed online.

For more detail about Father D’s life, use the link below. 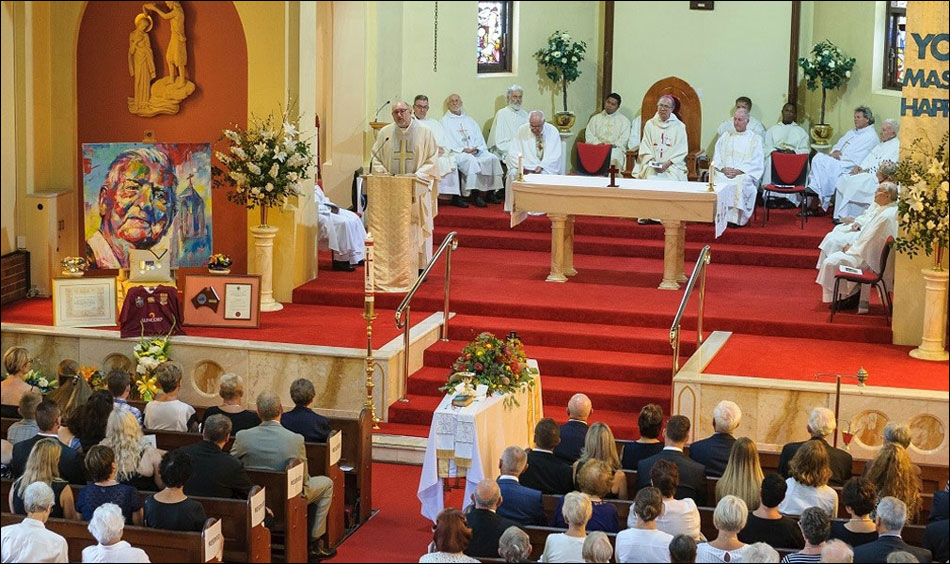