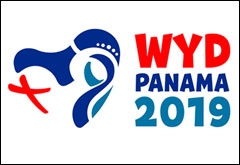 World Youth Day (WYD) is a worldwide encounter with the Pope, celebrated every three years in a different country. WYD 2019 has just been celebrated in Panama City.

WYD 2019 was the sixteenth WYD. The theme for WYD 2019 was;
I am the servant of the Lord. May it be done to me according to your word.

There were many events which made up the WYD festivities including catechetical sessions with participating bishops, music, prayer and reconciliation opportunities, the official address from the pope, Stations of the Cross and the closing ceremony at which the next host diocese is announced by the pope.

In the pope’s welcome speech, he reminded the audience that WYD is a celebration of joy and hope for the Whole Church and for the world. Pope Francis went on to talk about the people gathered for WYD and how united they were in their gathering. He reminded them that this unity comes from the knowledge we have all experienced the profound love of Christ.

Pope Francis celebrated the opening Mass at the newly restored Cathedral Basilica of Santa Maria la Antigua. Before saying Mass, he visited her shrine and placed a golden rose in Mary’s hand. In his homily, Pope Francis applauded those involved in restoring the cathedral.
And so WYD was kicked off and continued.

The events at WYD also included many musical pieces from performers such as Bernadette De Lourdes, Exalter Band, Genverde Band and Fr. Rob Galea. There was also an act based on Laudato Si’.

There were also many opportunities for payer and reflection throughout the celebrations. The official prayer for WYD, the Pilgrim Prayer, can be found using this link: Pilgrim Prayer

On the last night of WYD, over 40 000 people attended the night time vigil with Pope Francis. Many camped overnight in tents. The following day was the Sunday Mass of sending forth, again celebrated by Pope Francis. He looked out into the crowds and told them, ‘You, dear young people, are not the future but the now of God’.

The next WYD will be celebrated is Lisbon Portugal in 2022.