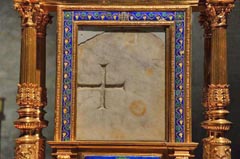 The Latin words Corpus Christi translates to “Body of Christ”. On the 16th of June we celebrate the Solemnity of the most Holy Body and Blood of Christ, Corpus Christi. On this day we acknowledge and celebrate the true presence of Christ within the Eucharist. This is one of the few liturgical celebrations that doesn’t reflect on a specific even from Jesus or Mary’s life, but rather his presence during Mass, through the bread and wine.

This Feast Day was inspired by a Eucharistic miracle in 1263. St Peter of Prague, a German priest, was on a pilgrimage to Rome and stopped at St Christina Church, Bolsena Italy, to celebrate Mass. He was afflicted with doubt about the Eucharist and questioned how can Jesus possibly share his Body and Blood with us, as he announced at the Last Supper. He questioned whether Jesus was truly present during the consecration of the Eucharist, and if the transubstantiation was truly real.

As he was consecrating the Eucharist, the host began to bleed, dripping through his hands and onto the Corporal that is placed on the Altar. After an investigation, this was deemed a miracle by Pope Urban IV. The relics from this miracle were placed the Cathedral of Orvieto where they still remain today.

A year later, Pope Urban IV announced the Feast of Corpus Christi, a day to appreciate the great gift of the Blessed Sacrament. This was after St Juliana of Cornillon dedicated her life to establishing a feast for the Eucharist, after having a vision at the age of 16, of Our Lord instructing her to do so. After years of trying, she was able to convince Urban IV to create this feast to honour the Blessed Sacrament – the first to do so.

You can be apart of the Feast of Corpus Christi by attending Mass and reflecting on the Blessed Sacrament and the presence of Jesus.