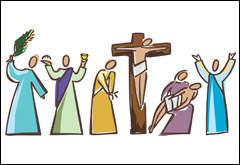 Easter is the celebration of Jesus’ resurrection on the third day after his crucifixion. It is one of the most important days in the Catholic calendar and is the foundation of the Christian faith.

Easter is the fulfilled prophecy of the Messiah who would be persecuted, die for our sins, and rise on the third day.

Like a lamb about to be slaughtered,
like a sheep about to be sheared,
he never said a word.
He was arrested and sentenced and led off to die,
and no one cared about his fate.
He was put to death for the sins of our people.

The week leading up to Easter is called Holy Week. Holy Week begins on Palm Sunday and ends at the Vigil Mass on Easter Saturday. The events of Holy Week are recorded in the Gospel accounts of Matthew, Mark, Luke and John. From these accounts, it is possible to put together a timeline of events in the week preceding Jesus’ death.

On Palm Sunday, Jesus triumphantly entered the city of Jerusalem on a donkey. He was welcomed by cheering crowds who threw their cloaks over the road and waved palm branches, shouting,

‘Hosanna! Blessed is he who comes in the name of the Lord!’

On Monday, Jesus visited the temple to pray. When he arrived at the temple, he was confronted with many traders inside the walls of the temple. In anger, Jesus overturned their tables and drove them all from the temple. He said,

‘My temple will be called a house of prayer. But you are making it a hideout for thieves!’

On Tuesday, Jesus was preaching to the people in the temple when the chief priests and the scribes came up to him to question him. They asked him what authority he had to be preaching his gospel. Jesus answered them by telling them several parables.

Then one of the twelve disciples—the one named Judas Iscariot—went to the chief priests and asked, “What will you give me if I betray Jesus to you?” They counted out thirty silver coins and gave them to him. From then on Judas was looking for a good chance to hand Jesus over to them.

Many Christians believe this night to be the most solemn night of the year. On the Thursday of Holy week, Jesus celebrated the Last Supper with his disciples, prayed in the Garden of Gethsemane and was arrested. During the Last Supper, Jesus celebrated the Passover with his disciples. Before eating, Jesus wanted to teach the disciples a valuable lesson about humility and service, so he washed their feet. Afterwards, he instructed his followers to share bread and drink wine in his memory. This well-known act became the basis of the Eucharist, which is the source and summit of the Christian life. During the meal, Jesus also said something that was shocking to the disciples. He said,

‘I tell you, one of you will betray me.’

After eating, Jesus and his disciples went to pray in a place called Gethsemane. Jesus, knowing what was about to happen to him, prayed in anguish to his Father. When he returned to his disciples, he found them asleep.

While he was speaking to his disciples, Judas arrived with a large crowd who were armed with swords and clubs. With a kiss of betrayal, Judas showed the soldiers who Jesus was and Jesus was arrested.

On Friday, Jesus was sent before the chief priests, Pontius Pilate and Herod as he endured several trials. Pilate tried to compromise with the religious leaders by having Jesus beaten, but this did not satisfy them, so Pilate handed Jesus over to be crucified.

Jesus was dressed in a purple robe and a crown of thorns. He was made to carry his own cross to the place of the skull, known as Golgotha. Here, Jesus was crucified alongside two other criminals. It is believed that Jesus hung alive on the cross for up to six hours. Right before his death, at three o’clock, he cried out, ‘My God, my God, why have you abandoned me?’ Then Jesus gave aloud cry and breathed his last breath.

Jesus was taken down from the cross and wrapped in cloth. His body was placed in a tomb belonging to Joseph of Arimathea.

On Holy Saturday, Jesus’ body lay in the tomb.

On Easter Sunday, Jesus rose from the dead!

Look out for ‘The Events of Easter – Part Two’ for details of Easter Sunday.